skip to main | skip to sidebar

In Revealing Images, photographer Don Spiro dishes up sweet photographic treats and the stories behind them. Today, Don aims his lens at Ursulina of the Velvet Hammer.

This was another photo from the first shoot I did for the Velvet Hammer program, back in 2001. Rita d’Albert, who now co-produces Lucha Va Voom, was a co-producer of the Velvet Hammer Burlesque troupe and performed in it as well, as Ursulina. The number she was doing at this particular show was inspired by Marie Antoinette, and she had an intricate, period style costume to accomplish it.

For the photo she wore the costume with metal panniers and an extremely large hat with ostrich plumes. It reminded me of Norma Shearer in the 1938 film “Marie Antoinette,” and I knew Rita also loved old Hollywood glamour, so that’s how we decided to shoot it.

She sat on a stool against a black backdrop, angled slightly to the side with her feet together, holding a small cane. Her confident expression was directed right into the camera lens.

Since Rita has great natural features and good cheekbones, I placed the key light very high and to the left of camera. The direction of the beam was in line with her face so a small shadow of her nose was placed directly above her lips, reminiscent of how Sternberg lit Dietrich in the thirties. The light was hard and created great texture, with crisp shadow lines and plenty of contrast. I added a snoot to create more of a pool of light, allowing the edges by the top of her hat and her legs below the knew too fade slowly into the darkness.

I wanted to make her glow like in old glamour stills, so I added a second light to the right of frame, just at her shoulder level. This created the glow I wanted, blowing out the highlights in her hair, hand, and parts of her ruffled dress. It also accentuated her cleavage, which had been already enhanced by the corset she wore.

I set the lens so that her face would be two stops over exposed, and the highlights would be four stops overexposed. This let me see into the shadows but keep the background dark. I wanted it to be perfect because the image would not only be used in programs, but also as 8 x 10s, and this was the day before digital, when the negative had to be duped and blown up to 8 x 10 to create prints.

Rita has been one of my most critical models, both of my work and her own, and I really think it raises the bar. This was actually our second shoot for the program, she had looked at tests from the first shoot and decided the make up wasn’t up to her standards.

I miss those days, when we had to be conservative with film and try to make every picture count, then wait several days to receive and examine every frame of a contact sheet, debating which image to circle with a grease pencil and pick for printing. You never knew if you really had the shot until then so you had to rely on your talent, skill and experience. I’m grateful that I started in that era: I think it makes my current digital work better and informs my style.

In our ongoing Q&A series --"The Candy Gram"-- we ask the same quirky questions of burlesque's various performers. If you want to be added to the mix, drop us a line at kellydinardo AT gmail DOT com. Today, say hello to Chastity Chaos.

What is your hometown?
Oxnard, Ca and Jacksonville, FL

How long have you been interested in burlesque/performing?
I became interested in performing burlesque around three years ago. I started going to shows and I rarely saw women of color performing. I wanted to rep for us.

How many pairs of pasties do you own?
Oh wow! I dunno! I make them myself. I have too many to count.

What are your three favorite songs to perform to?
C’est Lui by Josephene Baker, Boulevard of Broken Dreams by the Nat King Trio and The Stripper by any big band.

What three items could you not live without as a performer?
My creativity

Who had the biggest influence on your career?
Dorothy Dandridge. Her classic beauty and her sex appeal. The lack of a solid representation of classic Hollywood glamour among women of color inspires me to represent.

Who is your favorite burly queen?
Catherine D’Lish

What is your favorite item of clothing?
Thigh-high stockings

What’s the last movie you saw?
Temple Grandin… Loved it!

What book is on your nightstand?
Right now I don’t have any books on my nightstand, but I have a few zines there…

If you could go anywhere for vacation, where would you go?
OMG! Everywhere… I want to see everything. But if I had to pick one place right now, Paris!

If you could have any superpower, which one would you want? Why?
The power to freeze time, so I can sleep.

In Revealing Images, photographer Don Spiro dishes up sweet photographic treats and the stories behind them. Today, Don aims his lens at Gigi La Femme

Gigi La Femme recently posed for a series I’ve been working on using vintage 4 x 5 cameras and black and white Polaroid film, which has since been discontinued. She has the perfect pin-up figure, so in addition to this, I also shot some digital color pin-ups with a vintage flavor.

We had just shot some photos of Gigi with white ostrich plume fans and a pale blond wig, and when she changed into her red and white lingerie she kept the wig. I took the vintage press camera I had been using and set it up on an antique tripod as a prop, using a small rug as a tripod spreader. The set was a pale goldenrod wall and a hardwood floor.

I used a simple cross-light of two lights at forty-five degree angles to Gigi, bounced into reflective umbrellas. The one to the right of camera was a little below eye level, the one to the left was a little above, bouncing off the white ceiling and flooding the room with soft light, but still modeling the curves of her body.

I kept my camera distant and at the level of her waist to make her seem long and leggy. Having her pose with one knee crossed over the other to show off the lines of her legs, I asked her to place one hand on her hip, raise the camera cable release and smile at the camera as if she was taking a picture of me. Simple and elegant without any retouching, it is one of my favorite recent pin-ups. 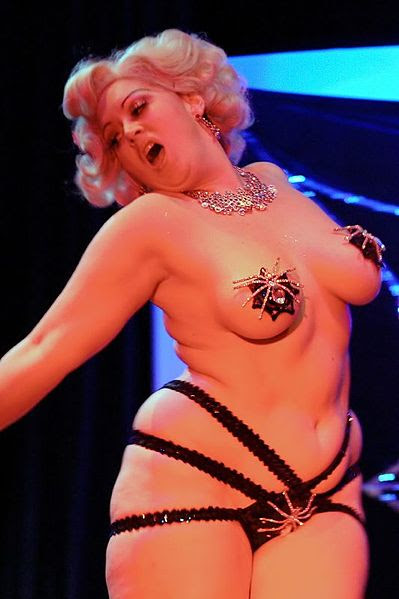 Did you know Dirty Martini can sing too? The burly queen partnered with the Baron of Weird for Naked Time, which you can listen to here. And don't miss them performing at Vandam in NYC tomorrow night.
Posted by Kelly DiNardo at 10:00 AM 1 comment: 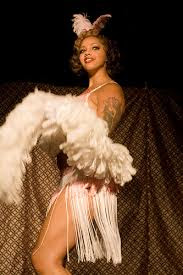 In our ongoing Q&A series --"The Candy Gram"-- we ask the same quirky questions of burlesque's various performers. If you want to be added to the mix, drop us a line at kellydinardo AT gmail DOT com. Today, say hello to Sydni Devaraux.

What is your hometown?
Seattle, Washington

How long have you been interested in burlesque/performing?
I performed in plays and did recitals as flutist in childhood until I hit high school and found the wonderful world of Jazz. I'd always been interested in singing and did behind closed doors, though it wasn't until I sang the National Anthem at an assembly and a wonderful teacher by the name of Mr. Brown came up to me and suggested that I perform in his vocal jazz group-did I think being on a stage expressing myself was really possible. From the world of singing jazz I found burlesque. I think I always knew what burlesque was in the back of my head-but it wasn't until I heard that beautiful women in lovely costumes and jewelery were dancing to the music that I was having a love affair with did I actually seek it out. I mean, to me, burlesque was everything I loved-music, movement, glamour and wit. Finding that those all existed in this world was ecstasy.

How many pairs of pasties do you own?
Probably about 15 though I favor about 5 pairs that are completely covered in rhinestones. Rhinestones really make pasties fantastic!

What are your three favorite songs to perform to?
Anything with an excellent beat and a dynamic melody! I mean, my three most well known acts are to Shake Your Lovemaker by Cherry Poppin' Daddies, Magdalenha by Sergio Mendez and Fat Bottom Girls by Queen. I love to have diverse acts.

What three items could you not live without as a performer?
Fake eyelashes, my music, and perhaps a shimmy belt. When I'm cranky or in a bad mood it's a lot of fun to slip one on and bop around the house to some music. I'm happy in no time!

Who had the biggest influence on your career?
I think it's a tie between 4 people: Catherine D'Lish, Dirty Martini, Tigger!, and Julie Atlas Muz. Watching them perform is so wonderful, and they make everything look so easy-it's very clear that they enjoy what they do. I love to see performers where personalities shine, and their stage presence is larger than life. Seeing these performers made it clear I needed to stay true to the things I love, no matter how wacky my ideas can be.


Who is your favorite burly queen?
This question is simply unfair! But I'll play your game and name a legend from the past, as clearly she's still a diva: Tiffany Carter. That woman simply blows my mind. Seeing her perform at BHOF 2009 was simply divine. Her movements are so smooth, her smile so bright-I have a mad crush on her. It's probably a good thing I didn't know her when she was younger. I probably would have said something improper!

What is your favorite item of clothing?
I have this red wiggle dress that I can wear and instantly feel sexy and wonderful. It doesn't even matter if I'm in my show makeup or date makeup-that dress looks smashing on me.

What’s the last movie you saw?
The documentary on Metallica. So fascinating.

What’s on your must-see-TV list?
Pretty much everything on the Bravo channel. It has Top Chef, the Real Housewives series, Rachel Zoe.... That channel rocks my world.

What book is on your nightstand?
2 books: Horrible Prettiness by Robert Allen, and Surviving your Saturn Return by Schostak and Weiss.

If you could go anywhere for vacation, where would you go?
Pretty much anywhere with a great dance party, a delicious Manhattan and an intoxicating city scape. Those twinkling lights full of possibilities are so magical! Exploring cities is one of my favorite things to do when I'm not performing.

If you could have any superpower, which one would you want? Why?
The power of persuasion. I mean, then you could just walk into Tiffany's and convince someone that they should give you a diamond ring and then go to Louis Vuitton and persuade them to sponsor a fabulous burlesque tour around the world-with their luggage, of course! I suppose this power could get out of hand...but I'm capable of having some restraint!

The Candy Pitch allows anonymous comments as long as they don't contain content the administrator deems inflammatory or spam. The Candy Pitch reserves the right to delete any comment at any time for any reason.

Bookmark this on Delicious