skip to main | skip to sidebar

Inspired by Jo Weldon's new book The Burlesque Handbook Frisky readers share ideas on how to entice their partner.

The annual calvacade of flesh and fantasy, Burlesque-A-Pades kicks off its summer tour July 16.

The stars of Burlesque throw a party.

The Candy Pitch now has a video channel on YouTube where you can share videos with us and see our favorites.
Posted by Kelly DiNardo at 12:30 PM No comments:

In Revealing Images, photographer Don Spiro dishes up sweet photographic treats and the stories behind them. Today, Don aims his lens at The Poubelle Twins.

This shot is a little bit of history. I’m proud to say that I was the first person to do a studio shoot with Bibi and Fifi, the Poubelle Twins. At the time, they were French maids in the Velvet Hammer burlesque troupe, the first troupe to continue the form and promote traditional American burlesque as a folk art. The Poubelles interacted with the audience and emcee, policed the stage after each act, and mutely served as aloof eye candy to draw in the fans. Before they came on the scene the performers, stage manager or the emcee were usually the ones to gather performers costumes from the stage. Not anymore!

This was my first shoot for the Velvet Hammer, at their rehearsal space on Sunset Boulevard, the Studio With No Name, which would eventually become my photo studio. The twins are actually the Duffy sisters, identical twin sisters who are well known in the Los Angeles animation industry. Their inspiration for the Velvet Hammer was the drawings of John Willie, a mid century writer and illustrator famed for “Bizarre” and “Diary of a French Maid,” who has probably influences late twentieth century fashion more than most haute couture design houses.

We shot with black and white film, 400ASA, using my Nikon camera. I like 400 speed film, I always over expose it by about a third of a stop to keep grain at a minimum, aiming to get detail in the shadows on the negative and then printing for the highlights, controlling how rich I want the blacks. We shot in Freon of a grey seamless backdrop, shooting full body shots, medium shots and close-ups. I used four open faced lights, two 1000 watt DP lights and two 650 watt Omni lights with white diffusion, from 216 full white down to light opal, repositioning them depending on the pose and composition.

This close up is one of my favorites. The twins’ faces were almost touching, Bibi on the left and Fifi on the right, leaving a small gap between them of grey background, lit by ambient light. I placed one DP light behind the seamless, shooting over the top of it on a boom arm as a backlight, putting a glow on their white lace. A second DP light was covered with 250 half white diffusion and placed high to camera left, lighting Fifi’s face and eyes and casting her nose shadow down to the right. I placed a flag to the left of the light to keep it off of Bibi on the left of frame. I then took an Omni light to the right hand side and covered it with 216 full diffusion to create a bit of fill, aiming it at both twins. It softly lit Bibi’s face, keeping her eyes dark in relation to Fifi’s, and creating softer shadows. It also filled in the shadow areas of Fifi’s face. I bounced the other Omni light into a white card on the floor for even more ambient fill, barely noticeable but still there.

This and one full body photo of the Poubelles from this shoot were used to promote upcoming Velvet Hammer shows that year. At the time I had no idea how involved I would get in the burlesque community, or that there even would be a community as strong as it is now.

It’s been almost eight years since I shot this photo. It was my first burlesque studio shoot and the Poubelle twins first studio portrait session. It seems like a lifetime ago but when I look at this picture I can remember that day like it just happened.

~Don Spiro
Posted by Kelly DiNardo at 9:40 AM No comments:

Posted by Kelly DiNardo at 9:30 AM No comments: 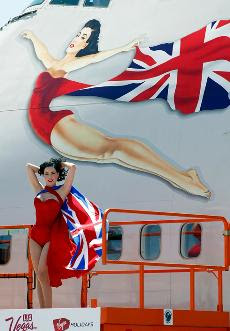 Dita Von Teese helps Richard Branson fly the friendly skies. The burlesque beauty is now emblazoned on the side of his 747. Something to celebrate, but not with Bombay Saphire.

Get a glimpse inside a burlesque queen's closet.

Ghostbusters gets a burly makeover.
Posted by Kelly DiNardo at 9:22 AM No comments:

Posted by Kelly DiNardo at 9:20 AM No comments:

"This is where we'd like to start. We've had shows here before, but this is the first time we've had a public space that's so accessible."

Jo "Boobs" Weldon, one of the premiere names in modern burlesque and founder of the NYC School of Burlesque, offers tips and tricks in her new book, "The Burlesque Handbook."

Burlesque legend, Tempest Storm fell and fractured her hip during her performance Friday night at the Burlesque Hall of Fame in Las Vegas. She is on the mend and starting physical therapy this week.
Posted by Ginger Valentine at 11:34 AM No comments:

The Candy Pitch allows anonymous comments as long as they don't contain content the administrator deems inflammatory or spam. The Candy Pitch reserves the right to delete any comment at any time for any reason.

Bookmark this on Delicious